Soundnote - Technology in the Classroom 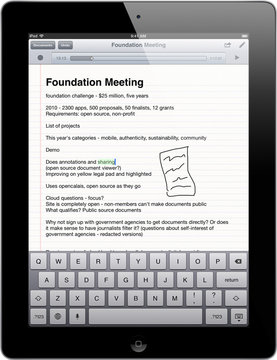 Developed for:
Soundnote is developed for devices using Apple's iOS such as the Apple Macintosh, iPad or iPhone. So if you happen to be using anything else, apologies. I'll update this post and/or write another post as and when I come across any updates and other similar applications that support other platforms.

Soundnote is a simple note taking tool that allows you to add diagrams to the notes, but also record what is being said (or any audio) at the same time and more importantly linking what is being typed to the audio recording, so clicking on any word in your notes, jumps the audio recording to the point that word was typed. This has the advantage that you do not have to go through a whole recording to find a specific mention. You only need to go to where you made a note at the time (or thereabouts).


Audio recordings are standard M4A (Audio only MPEG 4 format) and 1 hour will take up 25Mb of memory.

Notes and the audio files can be shared.


Technology in the classroom, is a series of posts looking at various technologies that can be used in the real and/or virtual classroom.
Posted by Kit at 09:00

The BLE is a digital education collaboration of six HE institutions in Bloomsbury.